Everything you need to know about phono cartridges! 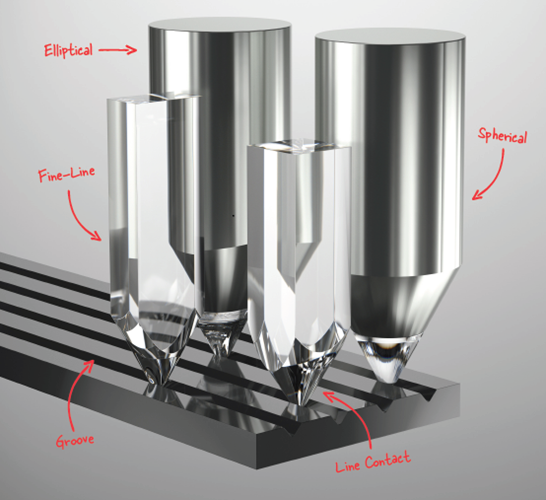 Everything you need to know about phono cartridges!

A century of accuracy in sound.

The history of Ortofon can be traced back to 1918 when two Danish Engineers – Axel Petersen (1887-1971) and Arnold Poulsen (1889-1952) – began their experiments to synchronise sound with pictures on film.

The name Ortofon is derived from the Greek words “orto” (meaning “correct”) and “fon” (meaning “sound”). Our products concentrate not only on providing the best sound, but more importantly the faithful and correct reproduction of the recorded sound.

Ortofon products concentrate not only on providing the best sound, but more importantly the faithful and correct reproduction of recorded sound. 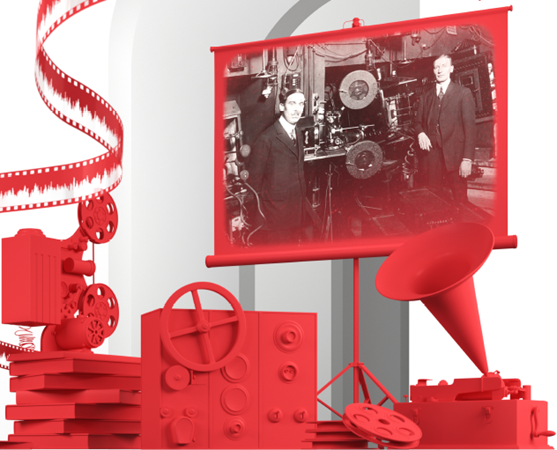 The law of electromagnetism

Hans Christian Oersted (August 14, 1777 – March 9, 1851) was a renowned Danish physicist and chemist who discovered that electric currents create magnetic fields, a discovery that had a dramatic impact and influence on scientific and technological development of the 19th century.

In 1820, during one of his lectures, H.C. Oersted noticed a compass needle deflected from magnetic north when an electric current from a battery was switched on and off, showing a relationship between electricity and magnetism.
The H. C. Oersted discovery showed that by connecting a battery to a wire, the wire generates an independent magnetic field.

Now, imagine the same battery connected to the wire, which is placed close to a magnetic material. Considering that the magnet mass is significantly larger than the wire’s, the wire will be attracted or repulsed, depending on the direction of the current. 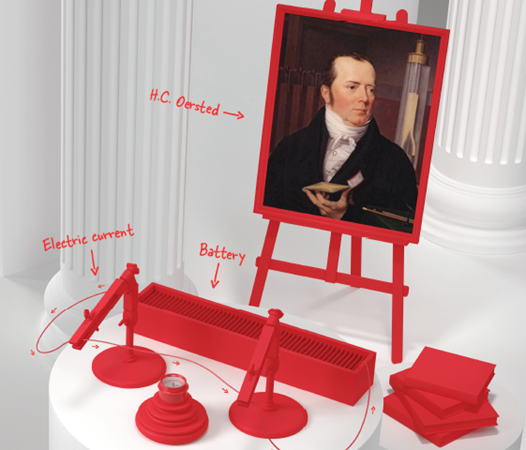 When coil capable of conducting electricity (a silver or copper coil) is set into motion perpendicular to a magnetic field, or when a magnet is moved near such conductive material, electrical current is generated in the circuit. The direction and speed of the movement determine the amplitude and frequency of the current. Thus, the generating system of a cartridge converts the movement of the stylus and cantilever into voltage, that we call the output signal. The magnet and coil are two main components that allow us to transform mechanical energy into electrical signal.

The function of the cartridge is to transform the undulations in the record groove to electrical oscillations, that are then amplified in an amplifier to finally drive the loudspeakers in the HiFi system. Common to all cartridges is a diamond stylus that mechanically follows the record groove, transmitting its modulations via a cantilever to a miniature generator, which in turn transduces the mechanical movements into electrical currents/signals.

If you play records and you have a marvelous turntable, amplifier, and loudspeakers but a poor cartridge, the sound will be as good as … the cartridge.
Music enthusiasts and Hi-Fi cognoscenti agree: the cartridge, positioned in the tonearm of the turntable, is the key factor in the reproduction of music from records. After all, it makes the first and only contact with the record. Thus, cartridge quality determines sonic performance even before sound is amplified and played through your loudspeakers.

We know that two things would happen if music lovers knew more about cartridges in general:
• Their music systems and their enjoyment of music would be significantly enhanced.
• Ortofon cartridges would be part of even more music systems around the world. 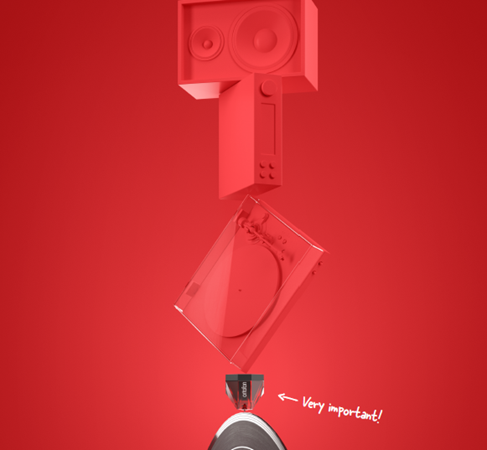 As digital audio technology improved it became possible to use analogue-to-digital converters for digital sound recording. This brought greater dynamic range to tape mastering, combined with low noise and distortion, and freedom from dropouts as well as pre- and post-echo. The digital recording was played back providing a high-quality analogue signal to master the lacquer cut. But still there are demands for the analogue tape recorder as the source for the lacquer cut mastering.

You might imagine many different ways to extract the music from the record groove. But, in fact, the only way is with a cartridge.
A cartridge consists of three basic elements: one of these is the stylus (diamond) that traces the record groove. Another is the cantilever, the part on which the stylus is mounted. The third is the generating system that converts the motion of the stylus and cantilever to electrical replicas of the sound and sends it on for amplification. 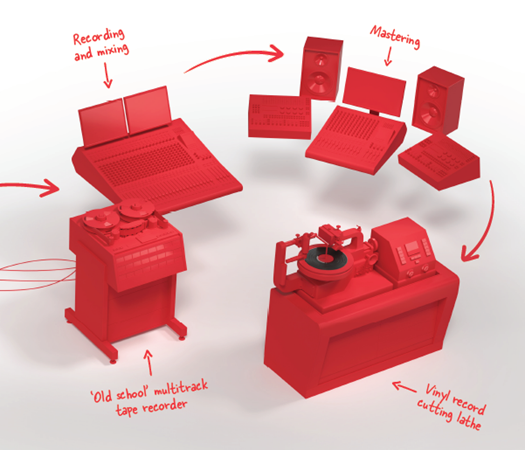 An extremely important component in a phono cartridge is the stylus

The stylus is the only part to make contact with the record. A force, normally between one and four grams, must be exerted by the tonearm to keep the stylus in the groove when the record is spinning.

The high-quality Ortofon styli are made from the hardest material known to man – diamond, and the stylus construction and shape are also crucial factors in sound quality. 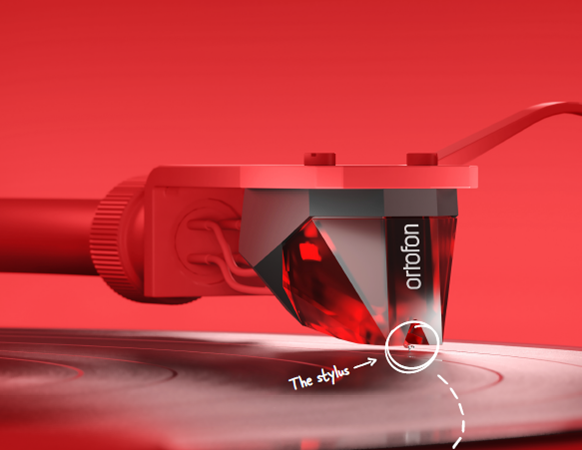 There are several different diamond shapes with various properties, and each of them are crucial factors for sound quality:
• The Spherical (also called conical shape) is the least expensive to manufacture. Spherical diamonds can be recommended in all cases where robustness, easy set-up and economy are taken into consideration in the purchase of a cartridge.
• The slightly more advanced Elliptical shaped diamond is able to follow the groove oscillations more accurately than the spherical type, and its distortion will, therefore, be less.
• A third stylus shape Fine-Line provides more faithful tracking of the groove. It has an even narrower profile than the elliptical shape, but at the same time its prolongated shape ensures the sufficient contact with a wide area of the groove.
• The Line contact styli (Shibata, Ortofon Replicant 100 and Fritz Gyger 70) distinguish themselves by having a narrow and long contact surface. The Line contact shape is as close as possible to the original cutting stylus which ensures the most accurate reproduction, low distortion and extended frequency range. 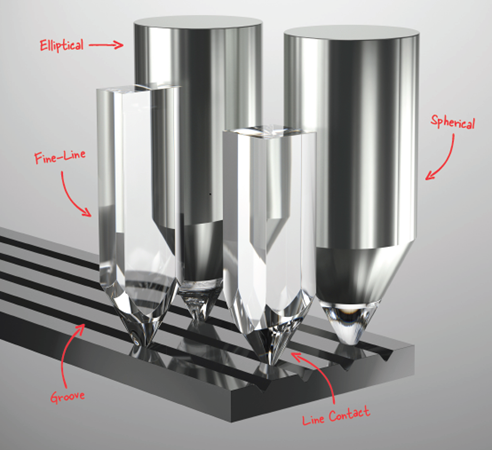 The purpose of the cantilever is to act as an intermediate between the stylus and the generating system. Compared to its size, the stylus moves at tremendous speed while it tracks the grooves of a spinning record. What transmits its motions to the generating system? The cantilever. In order that the cantilever may relay the rapid movements of the stylus, it should be light weight so it can respond rapidly to the twists and turns of the record groove. But it must be rigid, for any bending or flexing would add distortion and sound coloration.

Obviously, light weight and high strength require great ingenuity in design and materials. Aluminum is the most common material used for cantilevers, and it provides excellent mechanical pulse transfer from the stylus to the coil system. Higher performing materials such as Ruby, Sapphire, Boron, and Diamond are often applied in upgraded models, as they tend to be even more effective at transferring the smallest of these movements to the generating system. 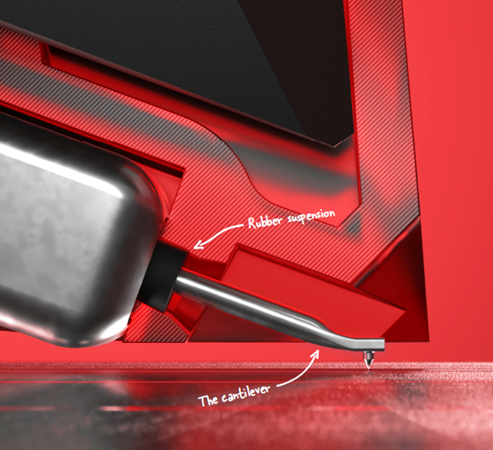 The generating system converts the motion of stylus and the cantilever into electrical replicas of the sound, which can then be amplified and reproduced by the music system.

When a coil capable of conducting electricity is set into motion perpendicular to a magnetic field – or when a magnet is moved near such a coil – electrical current is generated in the circuit. The direction and speed of the movement determine the amplitude and frequency of the current. Thus the generating system of a cartridge converts to movement of the stylus and cantilever into an output signal.

Ortofon utilizes a Moving Coil system recognized as one of the most refined in the world, as well as highly advanced Moving Magnet generating technique. 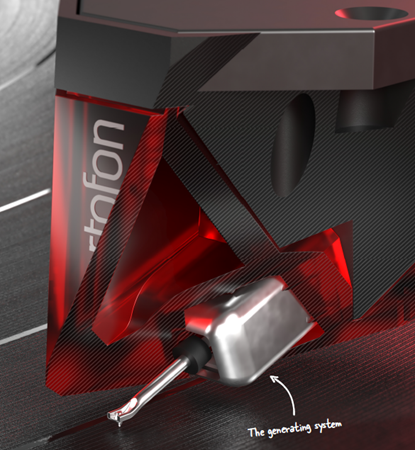 In a MM cartridge, the magnet is mounted on the cantilever and placed between the set of coils. The cantilever moves by following the tracks of the record, and hence the magnet moves with it. As the magnet gets closer to one of the coils, the magnet’s magnetic field induces a current in the coil, or in other words it generates electrical energy in the coil.

MM cartridges have high output and are less costly to manufacture since the coils can be machine wound. When the stylus wears out, you simply slide the old stylus assembly out of the body of the cartridge, and slide the new one in. 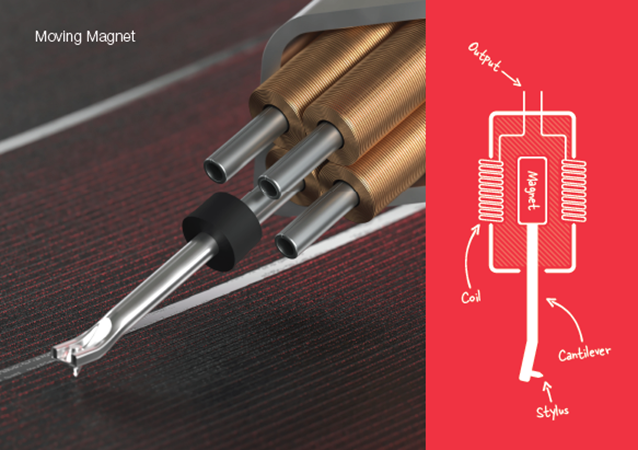 In the Moving Coil cartridge a powerful fixed magnet is used, and the coils are mounted on the cantilever itself. When the coils move in the field of the magnet, they cut the flux lines of the magnet, and voltages are generated in the coils. That is the most sophisticated – and most expensive – way to generate voltage is the MC system. Instead of a magnet, carefully handwound coils are mounted on the cantilever, and move in the field of a stationary magnet. Voltage is generated directly, with a minimum of distortion.

One of the primary benefits of the Moving Coil principle is that it offers lower moving mass, which is the sum of the weight of all parts which are responsible for directly responding to the undulations of the groove.  And to keep moving mass as low as possible with a MC, there are usually very few turns of the coil – typically only 15 to 20. This is in comparison to MM cartridges which can have as many as 3.000 coil turns of wire which are fixed – instead, their moving mass is governed largely by the weight of their small and powerful magnet. But fewer turns means significantly lower output voltage. So unless your amplifier is already designed to work with such a cartridge, the best Moving Coil models require a preamplifier or a step-up transformer to boost output. 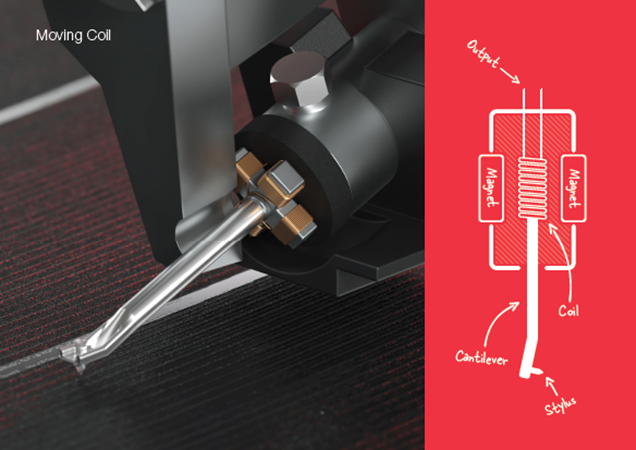 Why are Moving Coil cartridges so desirable?

How to choose the right cartridge 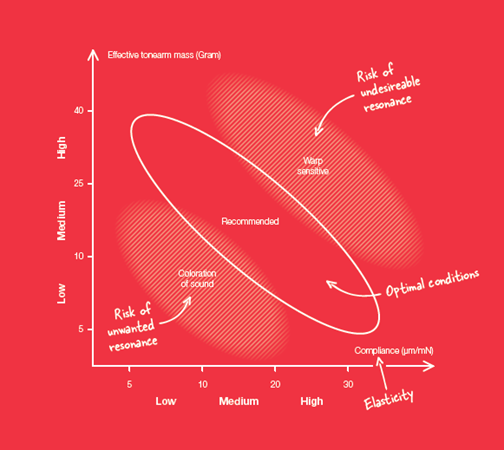 Take care about your phone cartridge and your vinyl records to get the best experience of your favourite music!
• Remove dust carefully from record surfaces by using Ortofon antistatic Record brush before every use. Also remember to remove any dust from the diamond tip before and after playback of each record.
• Use Ortofon Stylus fiber brush a few times along the cantilever in the direction of the stylus tip, whenever you play a new record or change sides. Use the brush in the forward direction from the rear of the cartridge towards the stylus tip and never from stylus tip to the rear of the cartridge and never from side to side. Following this treatment there will normally be no need for further stylus cleaning.
• Ortofon do not recommend the use of solvents of any kind for cleaning of either record surface or stylus. If necessary, records may be washed in lukewarm demineralized water with a dash of sulphonic soap.
• Please mount the stylus guard onto the cartridge whenever the cartridge is not in use in order to avoid accidental damage to the stylus or cantilever. The stylus protection guard provided for the cartridge is designed to be easily replaced and removed. 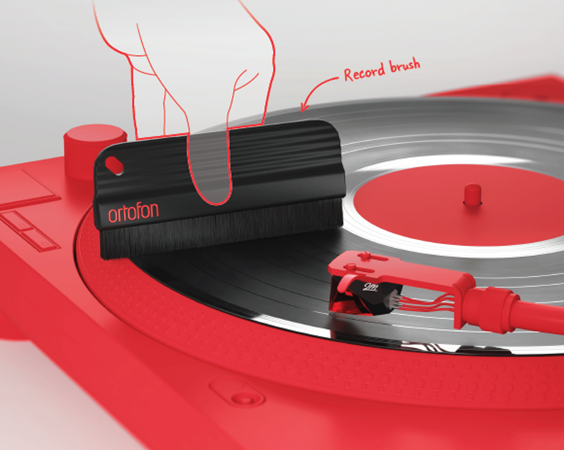 Download “Everything you need to know about Phono Cartridges” brochure here 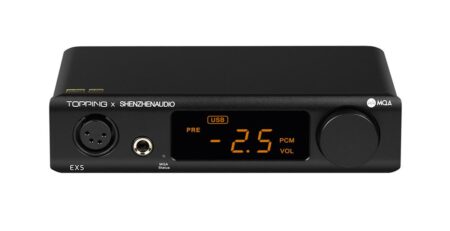 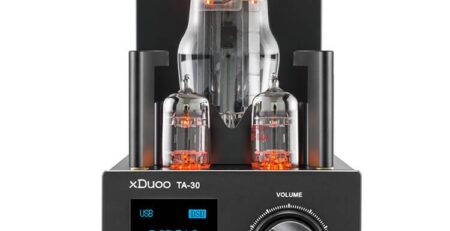 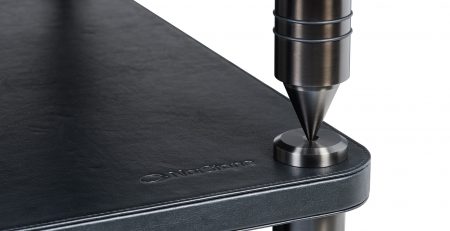 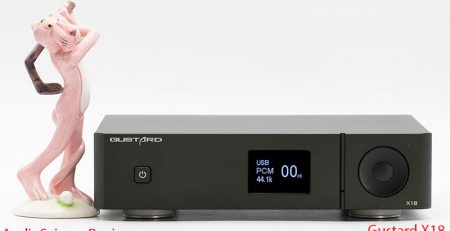 As you see style is very much the same as other Gustard products. I like the high resolution display... read more 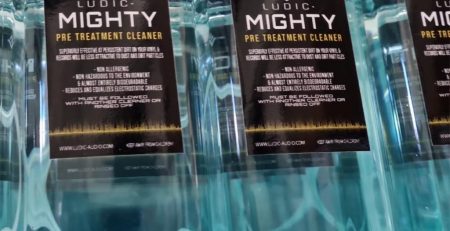 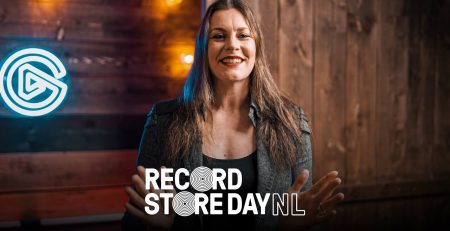 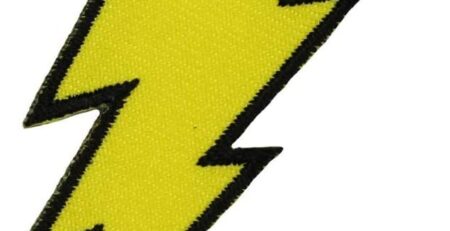 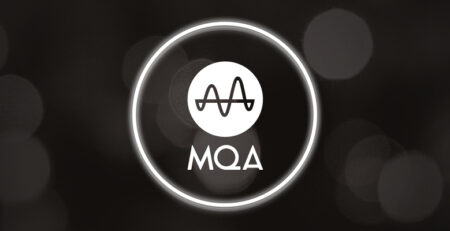 See how MQA ‘unfolds’ to deliver the best possible listening experience. MQA Core Decoder This unfolds the MQA file once to... read more 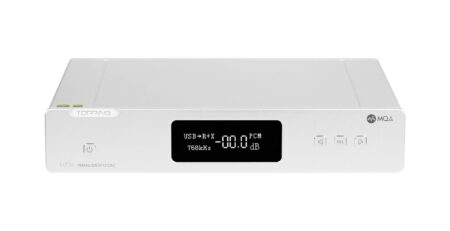